Ceramic Beads, are used for the electrical insulation of bare wires.
Consisting of short cylindrical tubes with one end concave and the other end convex, the beads provide a continuous shielding of a central conductor when strung in a mating or nesting order. Their versatility is most evident in non-linear flexible applications which require intricate layout patterns or motion displacement. Because of their flexible nestling feature these beads are also commonly known as Fish-Spine Beads.

Quick ViewRead more
Out Of Stock 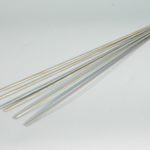